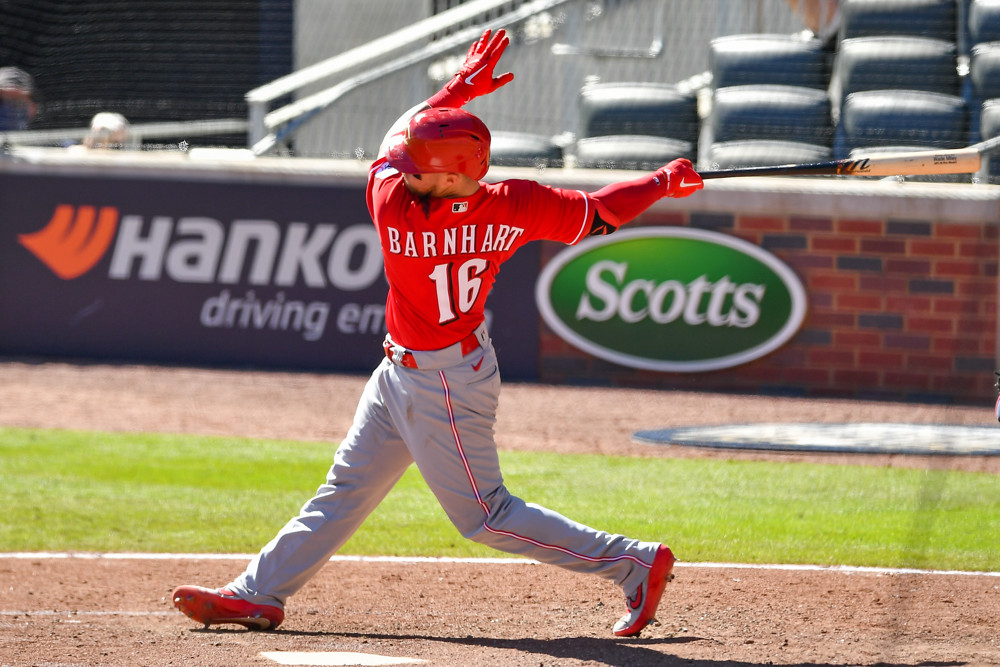 The World Series is over, and the Reds wasted no time in kicking off what should be an interesting offseason by trading long-time catcher Tucker Barnhart.

Let’s dive into the trade and all the implications that come along with it.

The Reds sent Tucker Barnhart to the Tigers in exchange for third base prospect Nick Quintana.

Barnhart spent eight seasons with the Reds and appeared in 744 games, eighth-most among catchers in team history. He was the team’s second-longest tenured player behind Joey Votto. Although a light hitter, he established himself as one of the best defensive catchers in the game, winning two Gold Gloves during his time in Cincinnati.

The move signals that 25-year-old Tyler Stephenson will become the Reds’ full-time catcher starting in 2022. Stephenson had a strong rookie year while splitting time behind the plate with Barnhart, hitting .286/.366/.431 with a 111 wRC+ in 402 plate appearances. Behind the plate, Stephenson is inferior to Barnhart but held his own. Stephenson was worth 3 defensive runs saved (0 is average) overall. Depending on the source you use, his pitch framing was somewhere between slightly above average (Baseball Prospectus) and slightly below average (FanGraphs, Statcast), while his blocking was just below average. The Reds can live with that given his hitting prowess, and there’s certainly room for him to improve.

Mark Kolozsvary is the only other catcher on the Reds’ current 40-man roster. A seventh-round pick in 2017, he fits the mold of a backup catcher: highly regarded for his defense but a poor hitter (.223/.330/.353 in 943 minor-league PA). The 26-year-old spent the year in Double-A and Triple-A before a brief promotion to Cincinnati in late September. He was also a part of the U.S. Olympic team that won a silver medal in 2021.

The Reds will likely sign another catcher to compete with Kolozsvary for the backup role next year. Notable free agents who could fit the bill include Manny Piña, Yan Gomes, and Roberto Pérez.

Barnhart, who will turn 31 in January, had a $7.5 million team option for the 2022 season. Clearly, the Reds were not going to pick that up. Barnhart also had a $500,000 buyout clause in his contract if the Reds declined his option. By trading him, the Reds saved that $500K and got a player in return as opposed to letting Barnhart walk.

The Reds will certainly need the money to give arbitration raises to Jesse Winker, Tyler Mahle, and Luis Castillo, among others. Perhaps they’ll make a run at re-signing Nick Castellanos or some notable free agents.

But rather than talking about that or saying the trade was about handing off full-time catching duties to Stephenson, general manager Nick Krall decided to focus on the payroll limitations in his PR statement.

“Trading Tucker was a very difficult decision. Having been drafted and developed by the Reds, our entire organization has a connection to him, and our fans love him. But going into 2022, we must align our payroll to our resources and continue focusing on scouting and developing young talent from within our system.”

In case that last sentence didn’t stick out to you, it’s in bold. From a baseball perspective, the trade was defensible. Rather than keeping his statement specific to baseball or building a winning team, though, Krall used the opportunity to talk about…payroll limitations.

We can hope that’s not a foreboding sign about the offseason ahead. It certainly won’t be surprising if the Reds shed payroll via salary dumps of Mike Moustakas, Shogo Akiyama, and/or Eugenio Suárez. The question is if that happens, will they actually reallocate resources this offseason? Or will they just give fans lip service like they did last year? We have no way of knowing at this second, but ownership and the front office haven’t exactly earned the benefit of the doubt.

When meeting with the media to discuss the trade, Krall gave more vague non-answers about the team’s payroll and offseason plans:

“We’re going to have to take it one move at a time and see where that goes.” (Goldsmith)

“It’s going to be more of a wait-and-see,” Krall said, “but I don’t think we’re not going to sign players on the free-agent market.” (Nightengale)

Anyone else excited for the Reds to maybe sign some free agents?

Who Is Nick Quintana?

Quintana was the Tigers’ second-round pick out of Arizona in the 2019 draft. Baseball America ranked him as the organization’s 20th-best prospect in 2020, but he fell off the list in 2021. There’s not much mystery as to why.

The 24-year-old has simply not hit in the minor leagues. In his two minor-league seasons, he’s hitting .190/.299/.308 in 635 plate appearances. He spent the 2021 season repeating High-A. Quintana has displayed good plate discipline (14.7% walk rate in 2021), but there’s not much else to get excited about. He’s highly regarded for his defense at third base, with good range and a plus arm.

The trade itself makes sense. Stephenson seems ready to take on an everyday role, and while Barnhart is valuable, the Reds could probably spend $7.5 million on something other than a backup catcher.

Had the Reds traded Barnhart, thanked him for his services, and moved on, it probably wouldn’t have been met with significant backlash. But in his latest PR snafu, Krall decided to remind Reds fans that payroll — not winning and/or assembling the best roster possible this offseason — was the foremost thought on his mind. Sure, Krall isn’t going to come out and telegraph every offseason move the Reds are planning to pursue. But it doesn’t inspire much confidence to continually remind fans about payroll limitations.

After the team’s inaction last offseason and quiet trade deadline, Reds fans have every right to be skeptical of what the front office will do this winter. Krall only put more fuel on the fire with his comments.

Should have left Tucker alone, Trade Votto , get rid of the 25 Million price tag, he hasn’t a lot of time left, put Tucker at 1st base, Go Reds..

I agree with you that the tucker trade itself makes sense. Manny Pina fits nicely (likely a few million saved and a better hitter). I hope they can move Moustakas and Akiyama. Akiyama to me could be released if it comes to that, but if they can extract some value back that’d be great. I’d like to see the reds trade moustakas and pay most of his contract value to save a few million if possible. I’ve noticed an interesting idea; Moustakas trade for David Price makes sense to me (red sox paying 1/2 would result in the same payroll for the Reds). Who knows if it does to the dodgers or reds. They could not resign miley and make this trade and save roughly 10 million in payroll. All of that savings as you indicate needs to be put into the other holes, that need to be filled.

I’m hoping that is what Krall is saying. “Where going to get creative with the payroll to max out our production within our organizations agreed payroll range!” This is exactly what the Rays do, but at an expertise level.