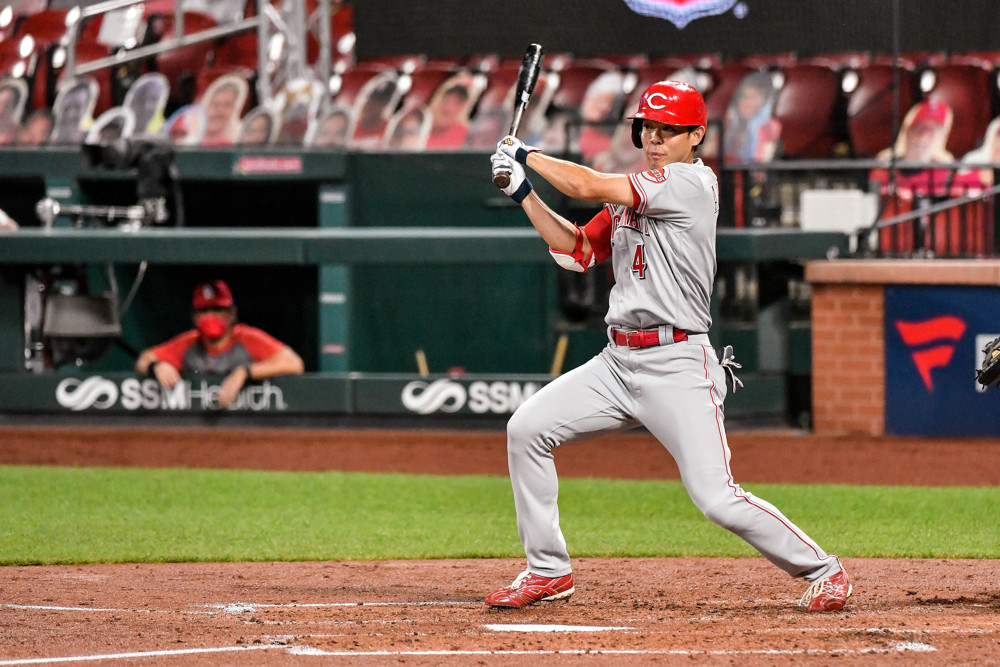 Reds broadcaster Jeff Brantley makes a sound when he’s reached a certain conclusion or endpoint with one of the team’s players. The Cowboy usually says it in background, while Tommy Thrall calls the play. Brantley’s move is kind of a grunt, but smarter. It’s a cross between “hmm” and “huh” — let’s go with humh.

The meaning behind Brantley’s humh is clear. It represents frustration, irritation and exasperation. It doesn’t intone a question, but is, instead, declarative. It says ‘I’ve seen enough.’ One syllable that speaks volumes. If you were attentive during the Reds radio broadcast Monday night, you heard Brantley say it as Shogo Akiyama grounded back to the pitcher on the first pitch he saw.

Brantley is at the same place we’re at with Akiyama. It’s time for the Reds to give up, admit a well-intentioned mistake, and move on.

The Reds signed Akiyama a couple years ago in the offseason of #getthehitting along with Nick Castellanos and Mike Moustakas. Akiyama’s contract is for three years at $21 million. He’s due to make $8 million in 2022, the contract’s final year, which makes Akiyama the fourth-highest paid player on the Reds. Like all major league contracts, Akiyama’s money is guaranteed, whether the Reds cut him or not.

That makes Akiyama’s salary what economists call a “sunk cost.” Sunk costs are costs that are already incurred and can’t be avoided. That concept produces the Sunk Cost Fallacy in reasoning. Researchers have found humans often follow through with something they shouldn’t because they’re invested in it.

Think of buying a ticket to a future baseball game for $40. When the day of the game arrives, you’re sick and your car is in the shop. You shouldn’t go, the Uber itself would cost another $30, but you’re influenced by the fact that you’ve invested $40 in going. Decisions made from the Sunk Cost Fallacy are emotional, not based in logic. It’s irrational to let sunk costs influence decision making.

In other words, the Reds can’t let the $8 million in sunk costs influence their decision about Akiyama’s roster status. It has nothing to do with the merits of the decision.

He struggles to elevate the ball, too. Only seven players with as many plate appearances had a higher ground-ball rate than Akiyama (56.9%) in 2021. Only five players with at least 200 batted balls have a lower average launch angle than Akiyama (2.2 degrees) over the last two years.

Akiyama turns 34 on April 16. It’d be a tall task for him to make a significant improvement against major-league pitching at this point in his career.

Shogo plays excellent outfield defense and is one of the Reds’ best base runners. But the Reds have other options the outfield. To begin, they might only carry two lefties. Tyler Naquin and Jake Fraley are both better than Akiyama. T.J. Friedl is on the 40-man roster, plays a good center field and has actually hit a major league homer. If the Reds want to put the best roster together, Friedl makes the team over Akiyama. If Jake Bauers — a former top-100 prospect — develops as an outfielder, that’s another LH name in the mix.

Max Schrock could further complicate things for Akiyama. Schrock is a better hitter and brings tremendous versatility with his ability to play infield and outfield. The Reds could choose to carry one less outfielder if Schrock makes the team, which appears quite likely after José Barrero’s hand injury.

Spinning new narratives about players at the start of spring training has become a clichéd ritual. So-and-so has lost weight, he’s in the best shape of his life, he’s put on muscle, he’s fully healthy now, he has a new approach, a new swing, a new bat, a new workout routine, even a new hair style or color. Anything to generate optimism. In most cases, these changes turn out to be meaningless.

The reporting on Akiyama this spring has been flush with those stories. He’s put on weight in the offseason to add strength. He’s made a change to his approach that includes an updated batting stance. Akiyama has decided to become more aggressive. He’s fully recovered from the hamstring injury. Better things to come!

Later in Monday’s game, Brantley threw cold water on all of it.

After hearing so much about Akiyama, that he has a different workout and bat, you anticipate more bat speed and hard contact. It has not happened. If he’s having trouble with an 89-mph fastball, lord help you with these guys running it up there in the 90s.

Put another way, he’s looked like the same old Akiyama.

While we always caution against reading much into small samples and spring training stats, Akiyama has hit a grounder or struck out in 10 of his 16 plate appearances in the Cactus League. Yep, that sounds like the same player we saw the last two years.

Today, the Reds demoted T.J. Friedl and Jake Bauers, two players who might have made the roster ahead of Shogo Akiyama. With six outfielders left in camp, it’s looking more likely the Reds will put Akiyama on the Opening Day roster. Technically, Akiyama has three minor-league options remaining. However, his contract gives him the right to refuse a minor-league assignment. If the Reds do not choose to carry him on the 40-man roster and he doesn’t want to play at Triple-A Louisville, the team will have to release him and pay the man his money.

All that’s left is to see over the next few days is whether the Reds have the stomach to admit a mistake, accept Akiyama’s salary as a sunk cost, and make the clear-eyed decision to put a better player in the dugout.

This analysis brought back memories of my teaching days. There was a very famous case, Red Brand Canners, taught in many business schools back in the 1980s and 1990s. Students were asked to use linear programming to formulate an optimal production schedule for Red Brand. They typically included sunk costs in this formulation and got a sub-optimal production schedule. Maybe Nick Krall did not study Red Brand.

Almost every Reds fan saw this coming. This is the Cincinnati Reds after all.

Coming from Knoxville to watch a Friday night game. Years ago, I parked my car in Covington near the river and road the shuttle to the game. Can someone tell me a good place to park in this area of Covington that’s convenient to getting on a bus to the game?

Last edited 1 month ago by Joe

Also there’s the Purple People Bridge from Newport riverfront…should be lots of parking over there too (maybe crowded). Also used to be a water taxi?

Great analysis. Too bad though. Kinda Billy Hamilton like.