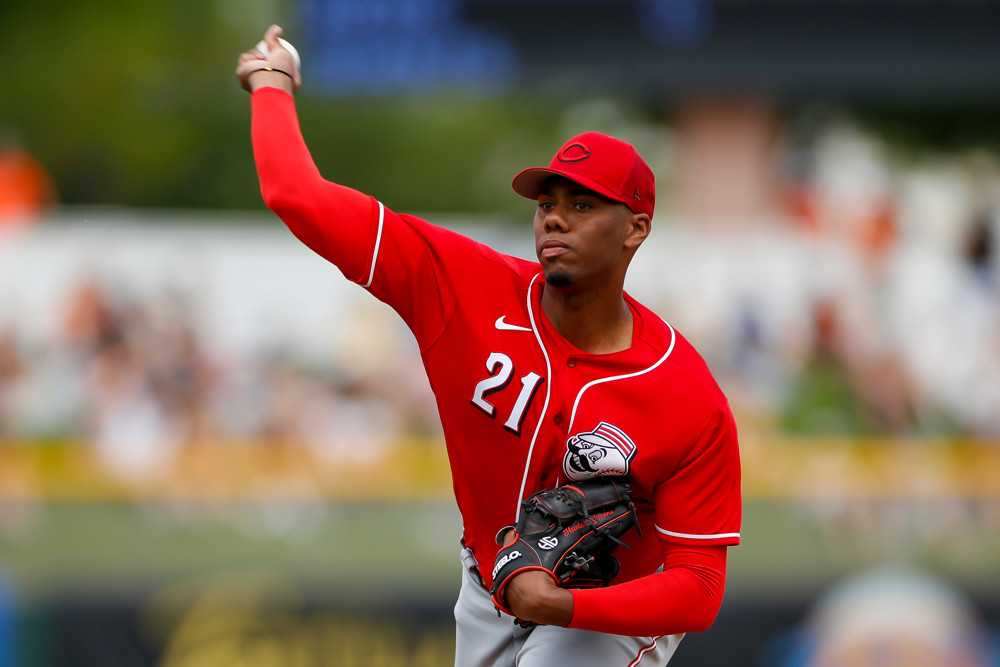 An MLB debut is always special. However, few generate the amount of hype as the debut of Hunter Greene did on Sunday. In recent Reds history, maybe Homer Bailey, Jay Bruce, or Nick Senzel come to mind. But it doesn’t happen often. Then again, a talent like Greene doesn’t come along often.

If Greene was nervous or amped up for his debut, it didn’t show. For the most part, he was as good as advertised in his first career start, demonstrating the poise of a veteran while confounding one of the best lineups in the game with his electrifying repertoire. The 22-year-old allowed three runs on four hits in five innings, striking out seven and walking two.

The former No. 2 overall draft pick owned the Braves the first time through the lineup, striking out six of the first 10 hitters he faced and allowing only one baserunner, a walk to Ozzie Albies. Through three innings, the Braves swung at 18 of Greene’s pitches and missed 11 times.

The rookie faced some adversity when the Atlanta lineup turned over. Matt Olson singled and Austin Riley doubled to lead off the fourth inning, which was followed by a sacrifice fly and a walk. But Greene got former Reds outfielder Adam Duvall to pop out on a slider down and away and got some help from Joey Votto when he made a diving stop on a line drive that looked destined for the right field corner.

The fifth inning brought more trouble for Greene, as he allowed a pair of solo home runs, one to Travis d’Arnaud and the other to Olson. Both homers came on fastballs left over the middle of the plate. Olson’s homer came on a 101.0 mph pitch. 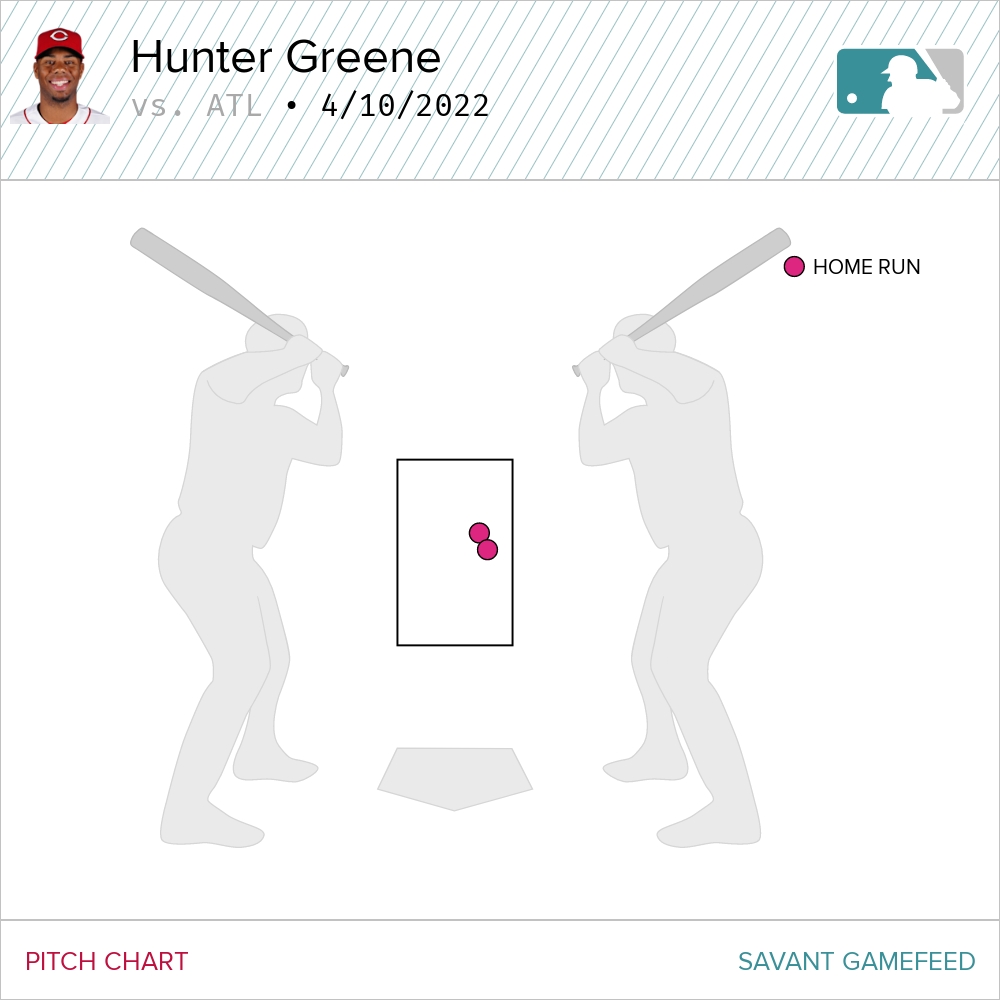 Despite a rocky ending, there was a lot to like about Greene’s debut.

Greene regularly and effortlessly hit triple digits with his four-seam fastball, averaging 99.7 mph and maxing out at 101.6 mph. Last season, Jacob deGrom led all MLB starters with an average fastball velocity of 99.2 mph. So, Greene already reigns supreme there. The 22-year-old topped 100 mph on 20 different pitches in his first start, and many of his other heaters were flirting with triple digits. To put that in perspective, Reds pitchers had combined for just 24 pitches at 100 mph or higher since Aroldis Chapman was traded prior to the 2016 season.

Greene didn’t just display elite velocity. He also showed above-average spin rate with his fastball, averaging 2,400 rpm on the 56 heaters he threw. Based on last year’s data, that puts him in about the 80th percentile among MLB pitchers. His fastball also had a 97% spin efficiency, which is the percentage of total spin that contributes to movement on a pitch. High spin, along with high spin efficiency, gives a fastball more “rise.” That is, it drops less than the average fastball and can cause hitters to swing underneath it, especially when thrown up in the zone. Indeed, Greene’s fastball got about an inch of rise above average in his debut.

Greene got eight misses on 25 swings against his four-seamer, a 32.0% whiff rate. League average was 21.9% last year. Several of those swings and misses came on fastballs up in the zone: 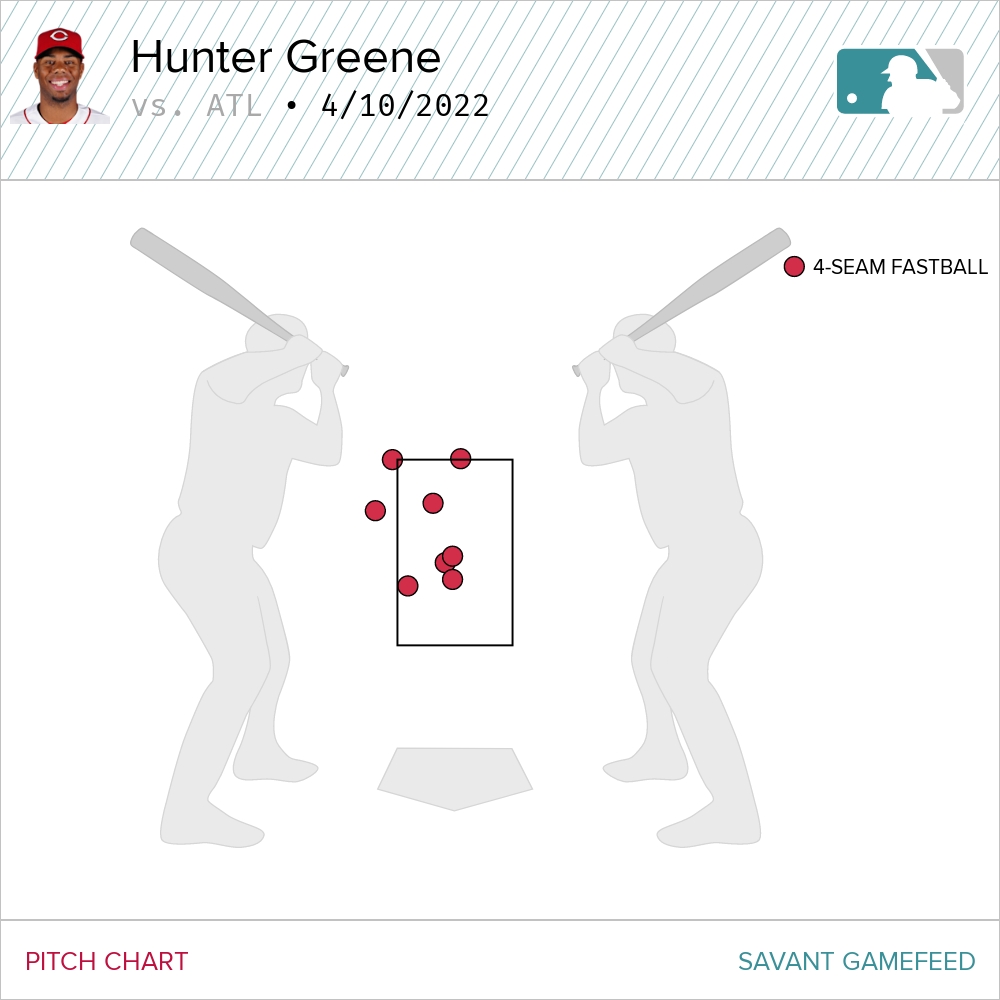 His first MLB strikeout was on a high, 100.3-mph heater against Olson.

While the fastball was dazzling, Greene’s secondary pitches were also impressive. He threw 23 sliders, which averaged 86.1 mph, and 13 changeups, which averaged 90.0. Yes, that’s right: a 90-mph changeup.

Greene’s slider gave right-handed hitters fits with sharp, late-breaking movement. The breaking ball displayed strong vertical and horizontal movement, getting 2.0 inches of drop (vertical) above average and 2.6 inches of break (horizontal) above average. The pitch got five whiffs on 11 swings, including an at-bat where Greene threw three straight sliders and Duvall swung through all of them.

Greene’s changeup, which he only used against left-handed hitters, was inconsistent. He threw some good ones, but it was clear that it’s still a pitch he’s working to develop. It got only one whiff on five swings, and it didn’t get much movement. The changeup measured at 6.9 inches of drop below average and 3.6 inches of break below average.

He also struggled to command the changeup in spots, leaving it hanging in the middle of the plate a couple of times and throwing a handful nowhere near the strike zone that were easily taken for balls. It’s a pitch he’ll have to keep working on, as it’ll be key to getting left-handed hitters out, especially when he’s facing them a second and third time in a start. 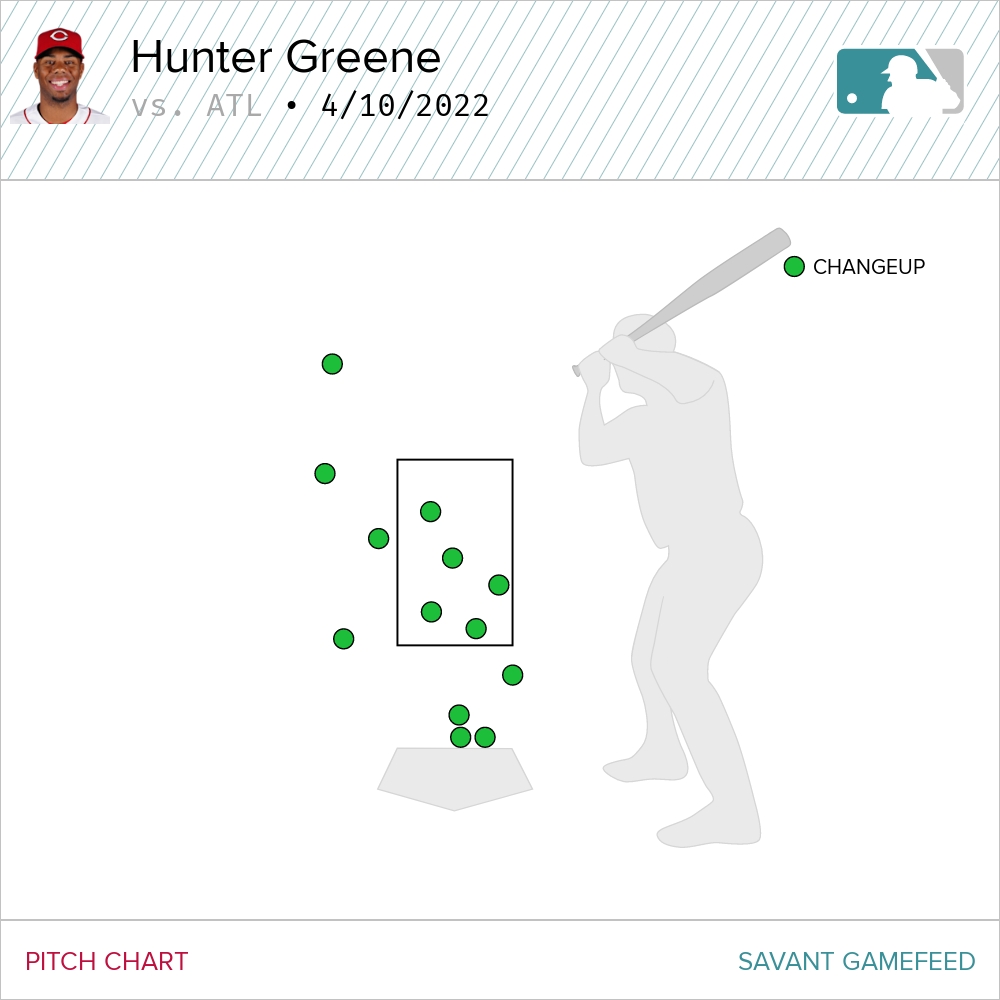 From the jump, Greene looked like he belonged on a major-league mound. He showed confidence in his ability and attacked hitters, rather than nibbling around the plate like many rookie pitchers do. Of course, it’s probably a little easier to have that confidence when you throw 100 mph. Regardless, it was impressive.

Greene threw 56 of his 92 pitches for strikes (58.3%) and issued only two walks, both to Albies. The Braves second baseman really had to work to draw the second one, grinding through a 10-pitch at-bat to finally get the best of Greene.

As Greene started to get hit harder late in his start, he didn’t back down, continuing to attack the strike zone. After he gave up the home run to d’Arnaud to lead off the fifth inning, Greene started the next at-bat against Dansby Swanson with three straight balls. Where many rookies would unravel, Greene composed himself and battled back to strike out Swanson on the 10th pitch of the at-bat with a perfectly placed fastball on the outside corner.

Even if it wasn’t perfect, Greene’s major-league debut lived up to the hype. His fastball sizzled to the plate with good movement, and his slider looks to be a devastating putaway pitch. He has some work to do with his changeup and getting through an opposing lineup for a second and third time, as opposing hitters started to time up his fastball after seeing it a second and third time.

But Greene largely held his own against a powerful Braves offense, teasing the baseball world with his off-the-charts ability. His starts will continue to be must-watch affairs.

Reread the SI article. They compared him to Babe Ruth and LeBron James when he was 17!

No doubt he’s faced enormous expectations, and he seems to have the maturity to handle it all. Really impressive.