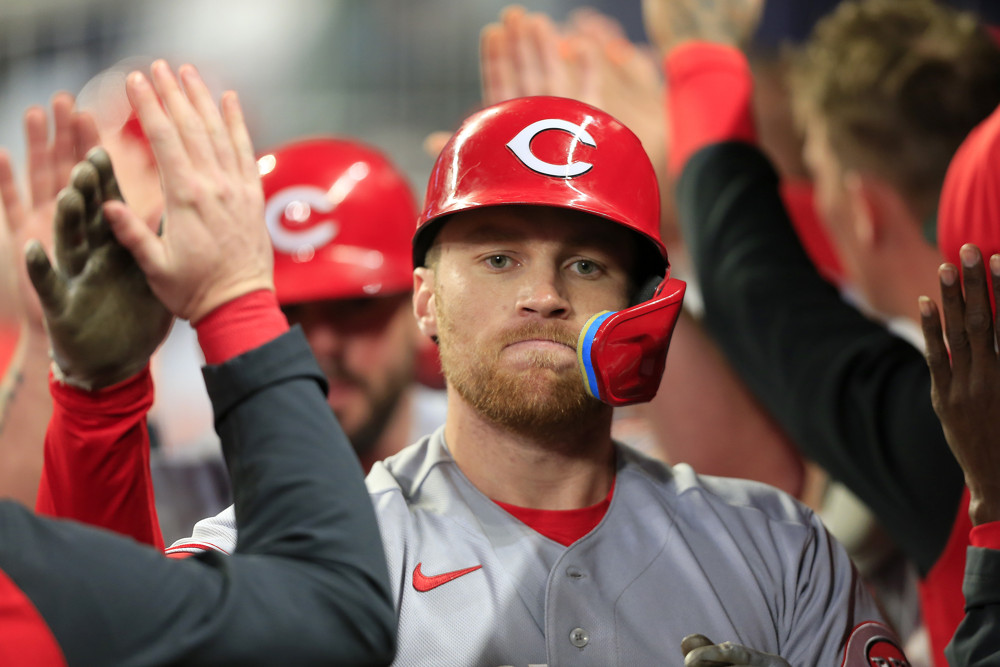 Signed to a minor-league deal on March 21, Brandon Drury was an afterthought at the beginning of spring training. He was a long shot to make the team. That is, until the Reds had no more viable options to back up Kyle Farmer at shortstop. After an early spring injury to José Barrero and later injuries to Max Schrock and Donovan Solano, Drury made the 28-man roster to begin the season — and it’s safe to say he has made the most of his opportunity.

But how real is Drury’s first-half performance, and what can we expect from him going forward? Could he end up more like Gennett, who sustained his success over a couple of years? Or is he destined to become Dietrich, who flamed out in the second half of his year with the Reds? Let’s take a closer look.

There wasn’t much in Drury’s career profile that indicated his 2022 season was coming. Before this season, he was a career .249/.296/.415 hitter. Put another way, he was 17% worse than the league-average hitter (83 wRC+). He didn’t hit for contact and showed little patience at the plate with a career 5.7% walk rate. The production he did have came from a respectable power output (.166 ISO).

That’s because he wasn’t finding an optimal launch angle frequently enough. Statcast defines the launch angle sweet spot as between 8 and 32 degrees. Last year, Drury’s sweet-spot rate (24.2%) was the worst of his career. Also dampening the success was Drury’s career-worsts in strikeout rate (25.0%), chase rate (38.4%), and walk rate (3.4%).

Long story short: Drury didn’t look like anything more than utility infielder who could get designated for assignment when other players got healthy. But it sure hasn’t turned out that way.

To further analyze his start, we need to look under the hood at some contact quality and plate discipline metrics. Drury’s walk rate (8.3%) sits above his career mark (5.9%), putting him in roughly league-average territory. He’s also swinging at fewer pitches out of the strike zone than he typically has. Drury has a 27.7% chase rate, well below his career average (30.8%). His strikeout rate is exactly in line his career average (22.0%).

Long story short: there hasn’t been a drastic change in plate discipline, but there’s been some improvement. We’ll need to see more, though, to feel strongly that this is a lasting change.

On the contact quality side, Drury has been a true standout. Here’s one example: 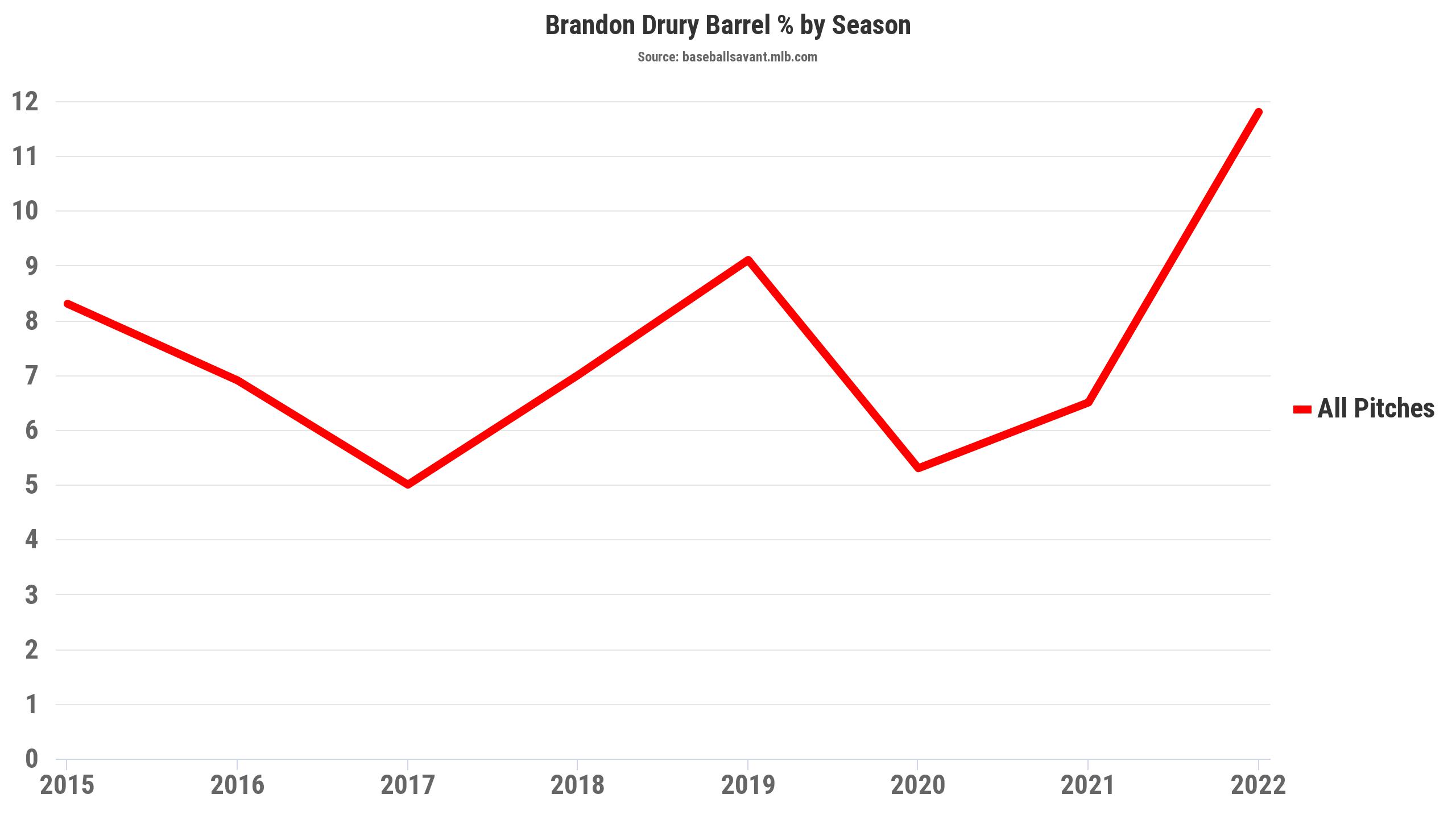 His 12.0% barrel rate ranks in the 82nd percentile among big-league hitters, and it’s significantly higher than his previous career best (9.1%). His 90.2-mph average exit velocity (72nd percentile) and 48.7% hard-hit rate (90th) are also career-bests. And this year, Drury is finding an ideal launch angle in addition to hitting the ball harder. His 34.7% sweet-spot rate is over 10 percentage points higher than in 2021 and a couple of percentage points higher than his career average.

As a result, his .269 expected batting average (xBA) and .508 slugging percentage (xSLG) exactly match his actual numbers. His .358 xwOBA is just six points below his actual wOBA, and it ranks in the 74th percentile. His .428 xwOBA on contact (xwOBAcon) is a career best by almost 50 points. Those all paint the picture that Drury has legitimately been a fantastic hitter in his 218 plate appearances thus far.

What Adjustments Has Drury Made?

To get more power, Drury was one of many players who made a conscious effort to raise his launch angle several years ago. He hit 37 doubles in 2017, his second full season in the big leagues, and wanted to turn some of those into home runs. Fresh off a trade from the Diamondbacks to the Yankees, Drury added weight and worked with the same hitting coach who helped fuel the later-blooming careers of J.D. Martinez and Chris Taylor.

Here’s what his swing looked like before the adjustments:

Most notably, Drury ditched his leg kick for a toe tap and was successful in raising his launch angle. 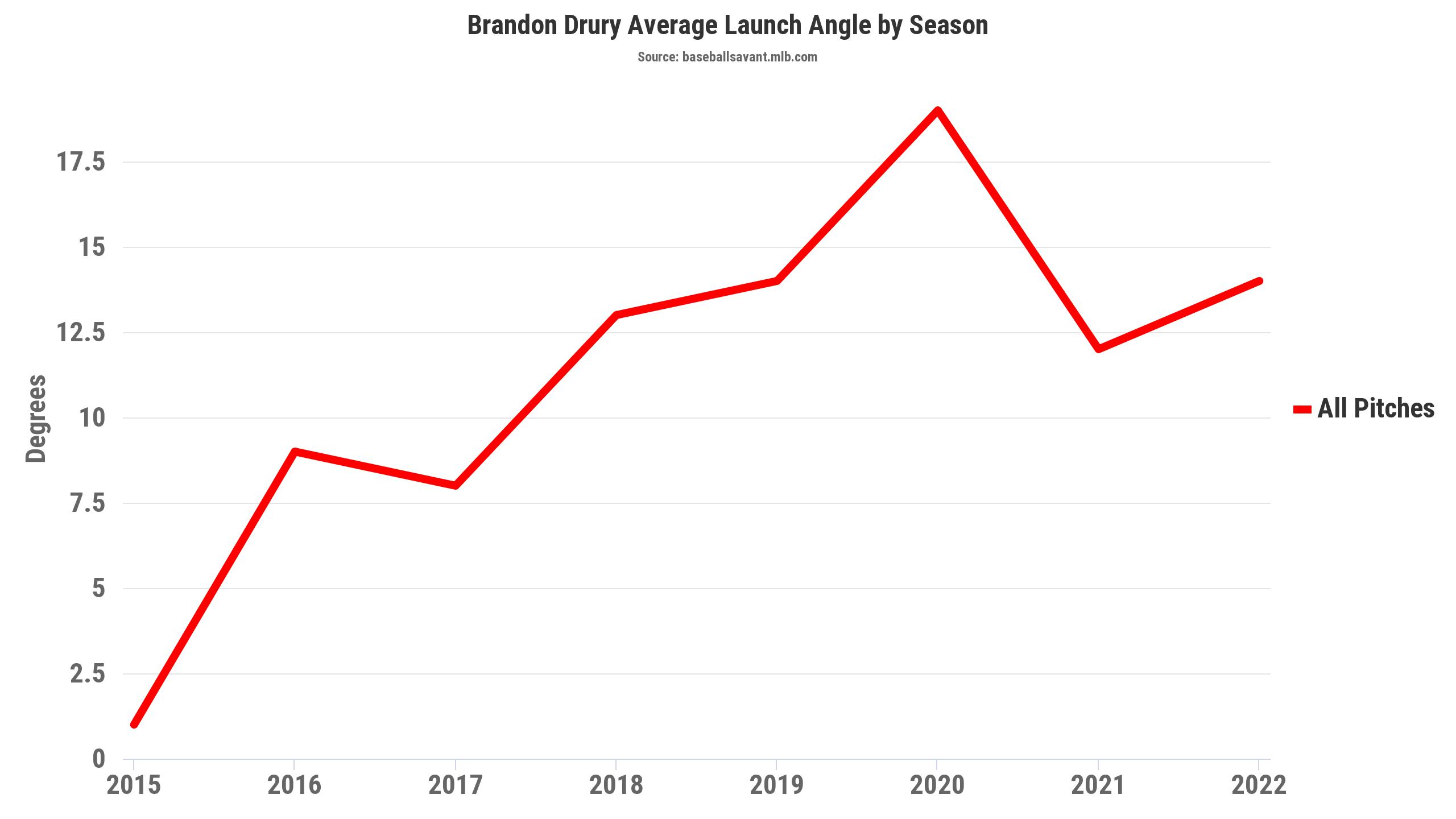 Migraines and a broken hand slowed him down in 2018 as he played in only 26 games with the Yankees and Blue Jays. Although he still showed some power by hitting 15 home runs with Toronto in 2019, Drury’s overall production fell off a cliff. 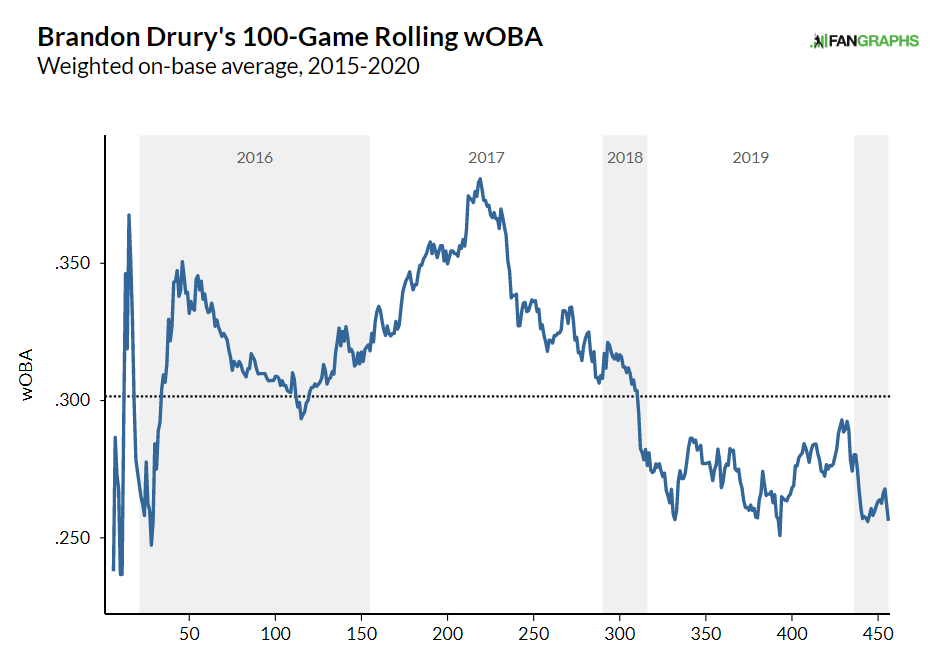 Drury started striking out more, and he wasn’t hitting the ball any harder than he did before the swing change. In fact, he was making worse contact.

Drury moved back and forth between a smaller leg kick and toe tap several times in 2019 and 2020 to little avail. He has said that he “completely forgot how to hit” after the mechanical changes he made and has gone “back to the basics” the last two years.

Here’s a look at his swing in 2022, which more closely resembles the swing he had early in his career:

Here’s a look at his swing through the years in one video so it’s a bit easier to compare and contrast:

Drury has gradually employed a slightly bigger leg kick than he did even earlier in his career. Paired with a higher launch angle and better contact quality, he’s getting the power outputs he desired entering the 2018 season — just a few years after he planned.

The bottom line is that Drury’s success in 2022 has been backed by fantastic underlying metrics and a tangible change in his plate approach. That leads to the belief that he may be able to sustain at least a decent amount of that success. However, 211 plate appearances is still a relatively small sample size when compared to his career as a whole. We are still at the point where it’s important to remain cautious with expectations going forward, although there’s reason for optimism given the underlying metrics.

Perhaps Drury will become a trade chip in a month or so, but for now, he continues to be one of the bright spots for the Reds in a season that hasn’t had many.

Very thorough post Kyle, thank you. I have to admit that when Drury signed I was not even remotely excited. He might be a trade chip in a few months but now that Walker Buehler is out will the Dodgers go after Castillo or Mahle.