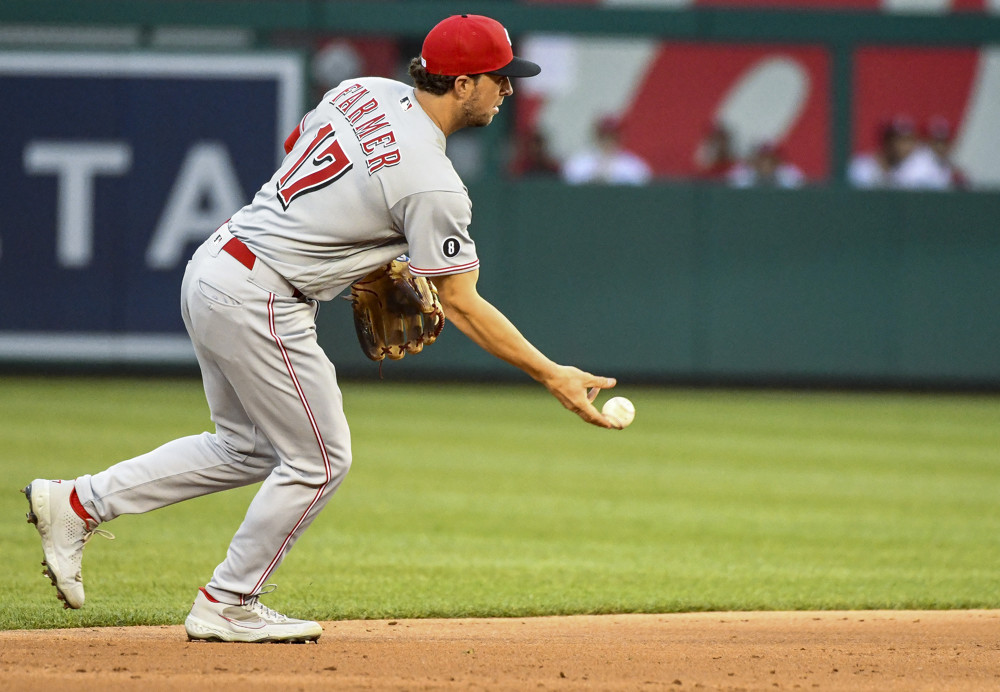 In a world dominated by social media, hot takes are a dime a dozen. Anyone can quickly spout off an idea that that they believe, regardless of how much evidence they may have to support their take. One can find these hot takes about a variety of subjects, from films to politics, nutrition science and more. In a universe as complex as baseball, hot takes are extremely prevalent.

I say this because I have a hot take about baseball. In an age where the back of a player’s baseball card is dominated by offensive statistics, defense is becoming an underrated skill. The typical fan, and even many broadcasters, typically use the easier-to-measure offensive stats as a way to define player value, causing strong defensive skills to be underdiscussed and underemphasized.

It’s possible that this belief of mine stems from the baseball philosophy drilled into me from one of my first baseball coaches.

You don’t need a degree in rocket science to understand why my coach would make this the mantra of a kids’ baseball team. Sloppy defense loses games, and sometimes, the best offense is a great defense. Teaching the basics of baseball, particularly the defensive basics, is critical for early baseball development of players, so they can focus on fine tuning the art of hitting when they are older.

It’s much more difficult to measure defensive skills over offensive production. The eye test isn’t a reliable method, and neither are the more traditional metrics of errors and fielding percentage (comment below if you’re curious why these are examples of faulty statistics). Fortunately, in the age of Statcast, fans have access to data that provides a more accurate picture of a player’s true defensive contributions.

Let’s apply a few of these defensive metrics to the Reds.

Outs Above Average and Runs Prevented

Outs Above Average (OAA) is a fairly new advanced defensive metric. It’s a range-based metric of skill that shows how many outs a player has saved over the average player. The calculation is different for infielders and outfielders, but both formulas arrive at the same output. For outfielders, the formula starts with Catch Probability, taking into account the distance the player must travel, how quickly he got there and the direction he traveled. For infielders, OAA takes into account how far the fielder has to go to get the ball, how quickly he got there and how far he is from the base the runner is going to. As its name suggests, a score of 0 would indicate a perfectly average defensive player. Anything above 0 is above average, and anything below 0 is below average.

For the 2022 season, Jonathan Schoop leads all qualified MLB players with 21 OAA, resulting in an estimated 16 runs prevented. Cardinals infielders Tommy Edman and Nolan Arenado are next in line with 14 and 12 OAA respectively, resulting in a total of 20 runs prevented. If you wanted to scroll to see which Reds player has accumulated the most OAA, you’d have to scroll for a while. At spot #69, we’d find Albert Almora Jr. with 2 OAA and an estimated 2 runs prevented. The next Red after him is Brandon Drury, ranked 130th in OAA, with a solid score of 0. (Aristides Aquino, TJ Friedl and Colin Moran have all generated positive OAA but in too small a sample size to qualify for the leaderboard.)

The more you dig into the data, though, the worse it gets. Check out the rankings for the Reds in terms of Outs Above Average. 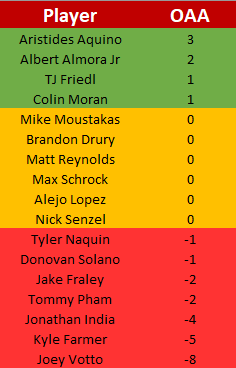 Yikes. Collectively, the Reds have an OAA of -16. This poor defense has had a direct contribution to runs given up this year. Let’s look at the data another way. How many runs have the Reds given up as a result of poor defense. 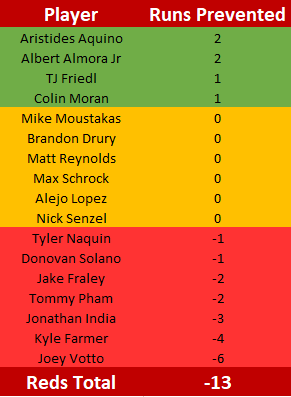 Collectively, the Reds’ defense runs prevented score is -13. That may not sound like a lot, but let’s do some math. As of me writing this, the Reds have scored 388 runs and given up 487 runs, giving them a run differential of -99. Let’s pretend that the players in the negative column above are simply average, with a run prevented score of 0.

This change would mean that the Reds have a new run differential of -80. Using the Pythagorean Winning Percentage formula, with this run differential, we can project the Reds as having a winning percentage of .407 and a record of 37-53. This record may not sound great (and it truthfully isn’t), but this would actually move the Reds from last in the division to fourth in the division, roughly a half game behind the third-place Pirates.

For those of you who fell asleep during my ranting about run differentials and Pythagorean formulas, this is the key insight here: If the Reds were very slightly above average on defense, they (very likely) wouldn’t be in last place.

Let’s address the elephant in the room here. Joey Votto is a defensive liability and hurts the team when he is on the field. Among active first basemen, he is considered the worst in OAA and is the fourth-worst among all MLB position players. Here’s another way to look at it: The incredibly slow Votto is currently in the 11th percentile for sprint speed, but he’s in the 1st percentile for OAA.

In other words, Votto is a better runner than he is a fielder.

It’s understandable that his defensive skills would decline with age, but at this point, the Reds need to be asking hard questions about who they want at first base. A small blessing here is that, with the designated hitter coming to the National League, Votto can move off of first base while keeping his bat in the lineup.

These defensive metrics are not perfect, but they do provide a reliable indication about overall defensive contributions. Baseball is a game of inches and inches eventually add up to miles. These defensive shortcomings, over the course of a season, contribute to the number of losses a team receives.

As an embarrassed Reds fan, it’s frustrating to see that an average defense on the field would likely have led to our team being only a half game out from third place in the division (this should also show how bad the NL Central is right now!). Looking to the future, the Reds will need to address these defensive shortcomings if they hope to get a competitive edge in the NL Central. If they don’t, it will be much more difficult to make the postseason.

That’s not a hot take. That’s just a fact.

Good article Micah. Since OAA is based on range it obviously does not apply to catchers so Tyler Stephenson is not mentioned in the post. What is your favorite metric for ranking catchers defensively and how does Tyler stack up? Thanks.

Glad you liked it! I’ve always found catcher ERA to be an interesting metric. It’s not perfect, but it’s a fascinating look at the impact that a catcher can make on the game.

This is one area where the eye test and the metrics pretty much align, at least for the Reds. Almora and Aquino look good visually. Votto and Farmer are visibly bad, and India is not the defender he was last year.

The computer likely rejects data pertaining to Moustakas as implausible. He would be a bad defender as a DH or even as an announcer.

Fielding data will never be as precise as hitting or pitching data, simply because there is a small sample size on any ball that is not routine. A center fielder, for example, is going to field only so many line drives deep into the left field gap in any season, and even those vary by what the pitch was, which way the wind was blowing, whether the other outfielders are klutzes, etc. By contrast, a regular hitter will see probably more than 900 fastballs in a season.

And finally, there is more to fielding than handling batted balls. A shortstop or second baseman will handle outfield relay throws, for example, and the arm of Brandon Phillips was quite a weapon. And the human has to take away about 1.5 OAA points from Brandon Drury, simply for the one play against the Yankees last week, where he demonstrated he didn’t have the instincts of a 13-year-old in executing a rundown.

Yeah, the Red’s defense is rough on the eyes for sure. They look so sloppy. And this poor defense extracts a hidden cost: The extra workload on the starting pitching staff. Over the course of an entire season, our starters will struggle to go deep into games with this defense.