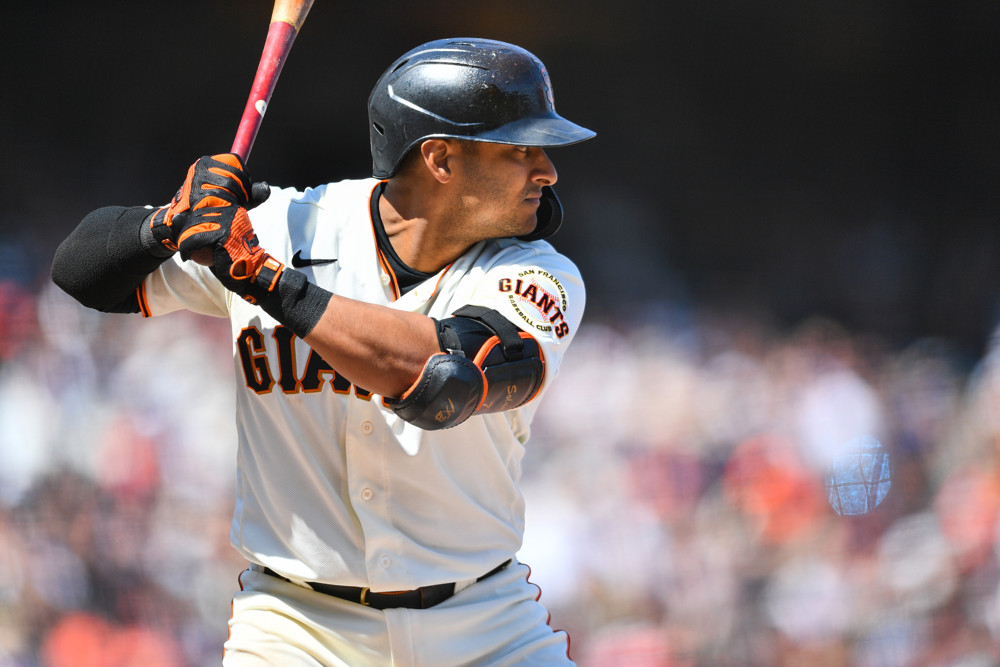 On Wednesday, the Reds announced they’ve signed infielder Donovan Solano to a one-year deal for the 2022 season. He’s just the second major-league player Nick Krall has signed as the vice president of baseball operations in two offseasons. The other was Sean Doolittle last year.

Let’s learn more about Solano and where he fits on the 2022 Reds.

Solano is an eight-year MLB veteran who shook off his journeyman status to find a home in San Francisco the last three years. The 34-year-old has primarily played second base in his career, and he also has experience at shortstop, third base, and left field. He bats right-handed.

Solano signed with the Cardinals as an international free agent from Colombia in 2005 but never advanced past Triple-A with the organization. He became a minor-league free agent after the 2011 season and signed with a minor-league deal the Marlins with whom he made his MLB debut in 2012. Solano spent four seasons in the Miami organization and was barely above replacement level during that time (1.4 fWAR), hitting .257/.307/.328 with a 77 wRC+ in 1,145 plate appearances.

After the Marlins outrighted him off their 40-man roster, Solano spent the next three seasons in the Yankees and Dodgers organizations. However, he appeared in only nine games at the major-league level, all in 2016.

He didn’t re-emerge in the majors until 2019, when he had his breakout season with the rebuilding Giants at age 31 by hitting .330/.360/.456 with a 116 wRC+. He spent the next two years in San Francisco, earning the nickname “Donnie Barrels” for his ability to hit line drives all over the field. The shortened 2020 season was a career best, as he hit .326/.365/.463 with a 126 wRC+. The performance earned him the NL Silver Slugger award at second base and nearly won him the National League batting title.

Solano was, unsurprisingly, unable to replicate his performance from the truncated season as his batting average on balls in play (BABIP) fell from an unsustainable .396 to .329. But his 2021 campaign was still respectable. Although he missed over 40 games with a calf strain and COVID-19 and lost some playing time at second base, he hit .280/.344/.404 with a 105 wRC+ in a career-high 344 plate appearances.

If the slash lines above didn’t give it away, Solano is a contact hitter through and through. He has only 23 home runs in nearly 2,000 plate appearances during his MLB career, including a career-high seven last season. Solano isn’t a patient hitter, either. He’s aggressive at the plate and won’t draw many walks (career 5.7 BB%) or strike out much (17.7%). Note that he did, however, set a personal best with a 7.3% walk rate in 2021 and dropped his chase rate from alarming (over 36% in 2019 and 2020) to average (29%).

Solano makes his money by hitting line drives to all fields, although he tends to try shooting the ball to the opposite field.

Here is his spray chart from the last three seasons: 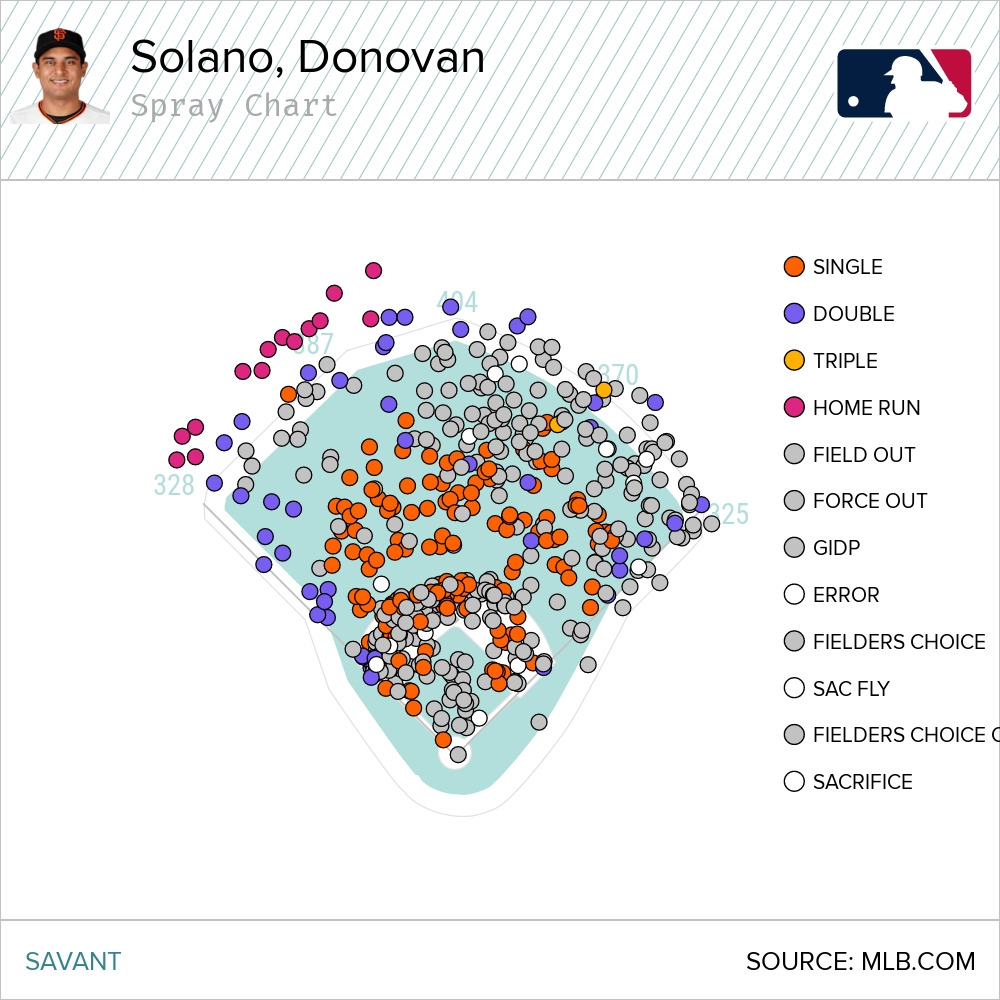 Early in his career with the Marlins, Solano struggled to elevate pitches as he hit a grounder nearly half the time he put the ball in play. That’s not going to get it done, especially for a player with below-average speed.

With the Giants, he cut his ground-ball rate considerably and started hitting more line drives. 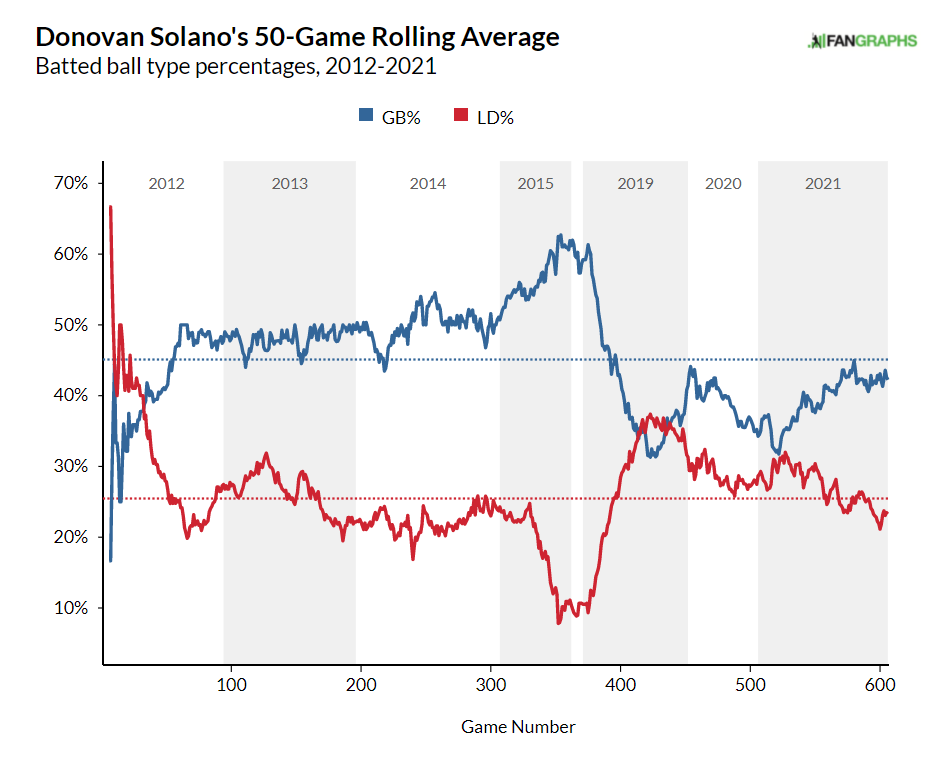 Put another way, Solano learned to increase his typical launch angle with a swing adjustment. The change didn’t suddenly make Solano a power threat, but it did resurrect his MLB career.

Solano’s profile may bring to mind someone like former Reds shortstop Jose Peraza. However, Solano possesses the ability to hit the ball with some authority — at least enough so to get line drives over the infield with relative consistency.

Here are Solano’s quality of contract metrics compared to league average over the last three years:

Solano is average to a bit below average defensively, depending on the metric of choice. There’s only enough meaningful data to evaluate his play at second base. Per defensive runs saved (DRS) and ultimate zone rating (UZR), Solano’s defense declined last season. Statcast’s outs above average metric still rated him as exactly average. The reality is probably somewhere in between.

Solano’s contract with the Reds is worth $4.5 million this season. It’s the largest free-agent signing the team has made since inking Nick Castellanos to a much larger four-year, $64 million deal prior to the 2020 season. Solano is only the seventh player on the Reds’ roster with a guaranteed contract. Every other player will either have to go through arbitration or will earn the major-league minimum ($700K).

With the addition of Solano (and Mike Minor), the Reds’ current payroll is currently about $98 million. General manager Nick Krall said the team is looking to continue adding. Sure would be nice to add a top-hitting outfielder for about $7 million. Wonder who could fit that bill? Hmm.

With Jonathan India locked into second base for the foreseeable future, Solano figures to serve in a utility role for the Reds. Third base seems like his best opportunity to get in the starting lineup, as the Reds will likely want to ease the workload on oft-injured Mike Moustakas.

Solano should also see plenty of playing time against left-handed pitching, a weakness last year that the Reds front office hadn’t previously addressed in any way before this signing. Over the last three seasons, Solano has hit .326/.367/.472 with a 126 wRC+ against southpaws. Even with a lesser performance overall in 2021 than the previous two years, Solano still handled lefties well, hitting .301/.344/.478 with a 121 wRC+.

Here’s how various projections systems expect Solano to perform in 2022:

Why the Reds front office felt it needed to trade away one of its top pitchers and its best outfielder to add a utility player and a mediocre pitcher remains a mystery. Still, Solano should be a helpful addition to the team. There is some degree of risk given his age, but he should help address the Reds’ glaring problem against left-handed pitching and provide valuable flexibility by playing multiple positions.

Now to fix the mess that is the outfield. And don’t forget the bullpen. Sigh.

[…] the Donovan Solano signing, the Reds continued their free-agent spending spree by inking first baseman Colin Moran and his […]