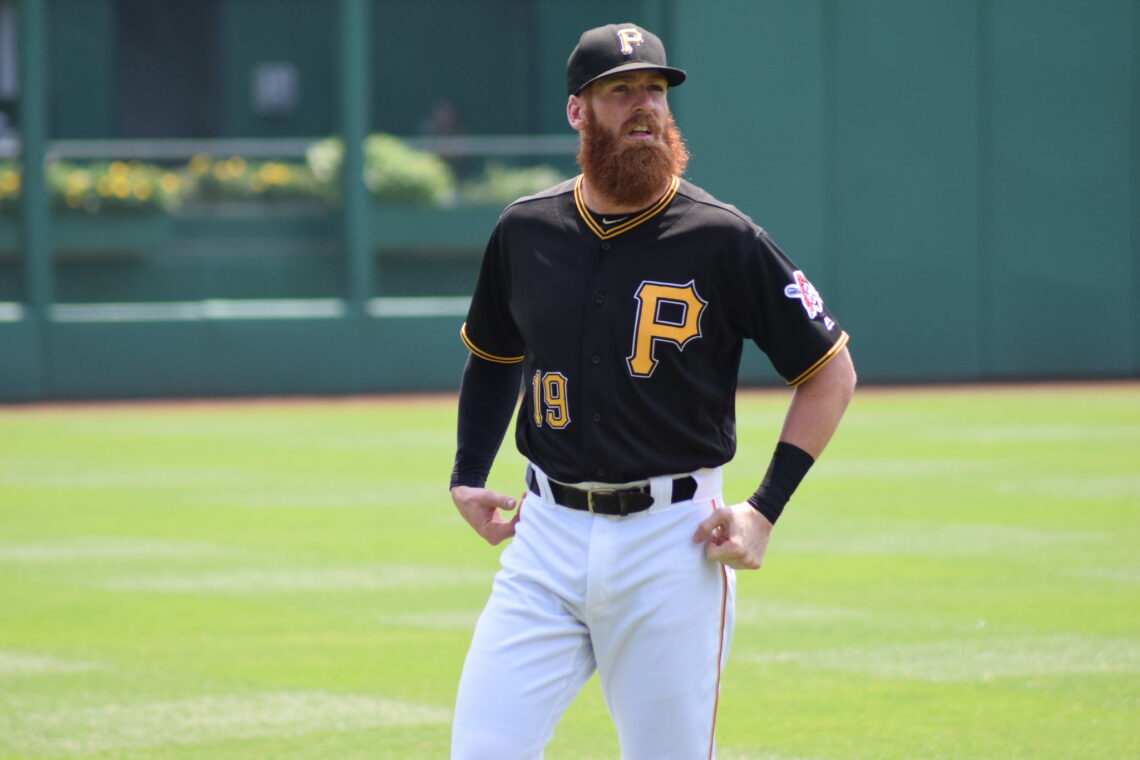 How does he fit into the 2022 equation? Let’s learn more about the newest Red.

Moran should be familiar to Reds fans. He’s spent six years in the majors, largely with the rival Pittsburgh Pirates. The 29-year-old started his career as a third baseman but has shifted to first base in recent years. He also had unsuccessful trial runs at second base and left field. He bats left-handed and throws right-handed.

A standout at the University of North Carolina, Moran was regarded as one of the top hitters in the 2013 draft. The Astros reportedly considered taking him No. 1 overall. Ultimately, Moran was taken by the Marlins with the sixth overall pick. He didn’t stay in the Miami organization long, getting traded to the Astros a year later for a package around pitcher Jarred Cosart. Moran was regarded as a “low risk” draft prospect who would get to the majors quickly, but his development didn’t pan out that way. However, he showed signs of a breakout in Triple-A in 2017. With a significant swing change, he tapped into some of his raw power and hit a career-best 18 home runs in only 82 games. The next offseason, he was on the move again, getting traded to the Pirates in the Gerrit Cole deal.

Moran became an immediate starter at third base with the rebuilding Pirates, but he never lived up to his early-career expectations. In fact, he’s been the pinnacle of mediocrity. During his four seasons in Pittsburgh, Moran was exactly league average at the plate (100 wRC+) with a .269/.331/.419 slash line. His career 0.0 bWAR and 0.8 fWAR make him the definition of a replacement-level player. The Pirates designated Moran for assignment in late November, prior to the lockout.

Moran doesn’t excel in any area offensively. He hit for a higher batting average in his first two seasons with the Pirates (.277), but he’s dipped to league average as teams started shifting against him more often. While his walk rate rose to a career-best 10.0% in 2021, no one will mistake him for Joey Votto in the plate discipline department. Moran has carried a high chase rate (32.2%) for most of his career, and that remained the case last year even as his walks went up (31.6%). Over the last three seasons, Moran has struck out at a 24.1% clip, slightly worse than league average.

Despite his 6-foot-4, 225-pound frame and the aforementioned swing change in 2017, Moran has never developed much power. Moran has hit just 45 home runs in his career — 10 against the Reds and seven in Great American Ball Park — and never more than 13 in a season. His career .151 ISO (isolated power) is below average, and his .418 slugging percentage is right around league average.

Moran’s swing change in 2017 was designed to help him lift the ball more and tap into his natural power. Beyond that year in Triple-A, however, it hasn’t come to fruition, as he still struggles to elevate the ball. Moran has a career 46.9% ground-ball rate (league average is normally around 43%), and his average launch angle is just 10.2 degrees (league average is around 12.5 degrees).

Those numbers have grown more extreme in the last two seasons, as he’s had more difficulty than ever getting the ball in the air. 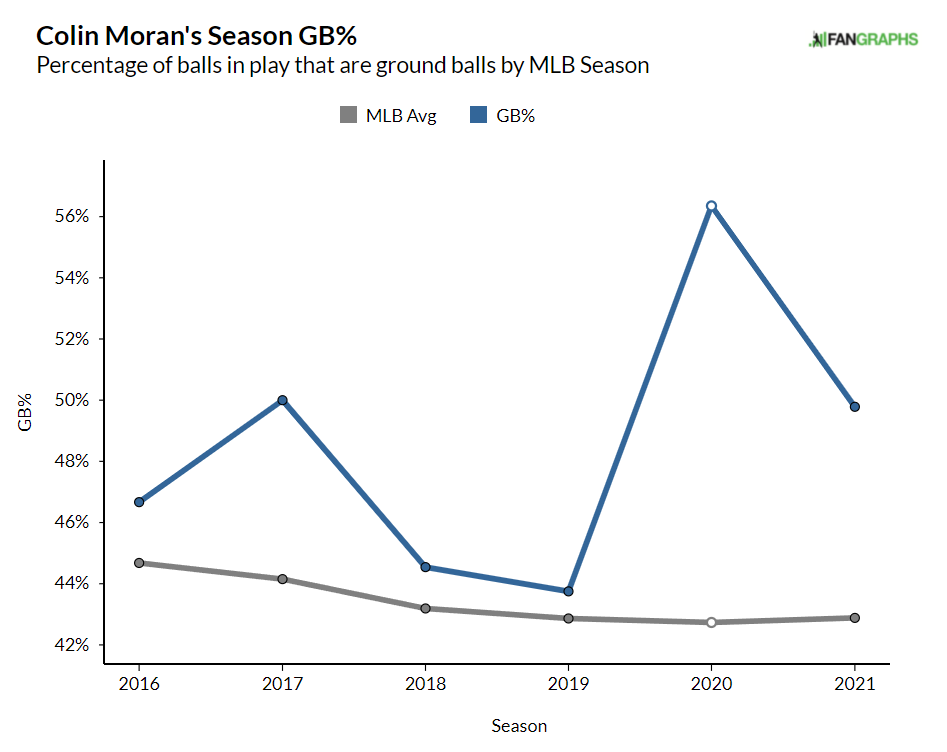 To hammer the point home, here’s a look at his average launch angle by year: 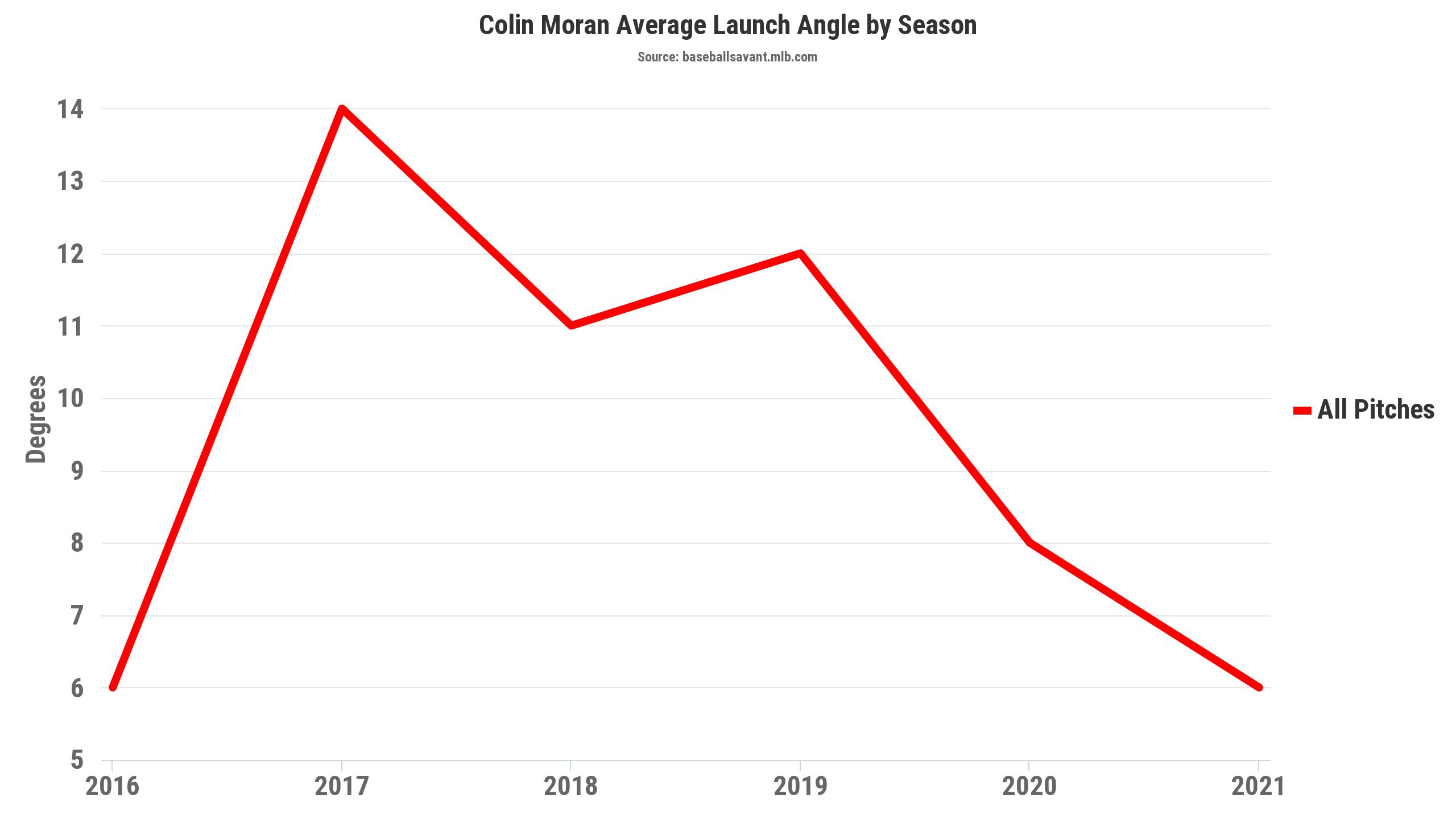 Moran’s swing change was also designed to help him pull pitches, another method of getting the ball over the fence more regularly. Between 2018 and 2020, his pull rate increased each year, peaking at 44.1% in the COVID-shortened season. The approach started bearing fruit that year when he had his best offensive season (113 wRC+). This was in spite of the fact that he hit ground balls at an astounding 56.3% rate. Only three qualified hitters had a higher ground-ball rate.

This combination of a high ground-ball rate and a high pull rate meant teams started shifting him more than ever in 2020. Moran faced a shift in 75.5% of his plate appearances. Perhaps in response to this, Moran moved dramatically in the other direction in 2021 as his pull rate dipped to 35.5%, a career low.

Early in the year, though, his 2020 success seemingly carried over. Through May 8, Moran was hitting .297/.352/.468 with four home runs and a 121 wRC+. But there were warning signs: he was carrying an unsustainable .392 batting average on balls in play, and his strikeout rate was creeping close to 30%. Moreover, his contact quality metrics (exit velocity, barrel rate, hard-hit rate) had fallen back to his pre-2020, mediocre norm as he returned to an all-fields approach at the plate.

While some degree of regression was likely coming anyway, injuries sped up the process and derailed his season from there. Moran was placed on the injured list with a groin injury on May 9 and missed a month. He struggled upon his return in June (74 wRC+), ending the miserable month by fracturing his left wrist when he was hit by a pitch. He returned in early August and was a below-average hitter the rest of the way, with the wrist injury likely playing a role in sapping his power (.130 ISO in his last 185 plate appearances).

What kind of hitter will Moran be in 2022? It’s hard to say with certainty since so much of his 2021 season was mired by injuries. Will he return to the pull-happy approach from 2020 to hit for more power? Will his quality of contact metrics ever return to the potential he showed in the pandemic-shortened season? Most likely, that year was an outlier for Moran. But there’s at least some optimism that Moran can be a quality offensive player when healthy.

Well, at least against right-handed pitchers.

You may have noticed we haven’t talked about platoon splits yet, and that’s a significant item of importance when evaluating Moran.

Moran is essentially unusable against left-handed pitchers and should not get a single at-bat against them if David Bell can prevent it. Moran has hit a paltry .216/.281/.331 against southpaws in his career. That’s a wRC+ of 66, or 34% worse than league average. It’s not an issue that has shown any signs of improving, either. Last year was his worst season against southpaws since 2018, as he batted .171/.284/.268 with a 58 wRC+. Even in his best season (2020), Moran was poor against southpaws (76 wRC+).

Against righties, however, Moran is a capable hitter. He’s batted .280/.341/.440 against them in his career, good for a 107 wRC+. That number isn’t elite by any means, but he can be a positive contributor versus right-handed pitching. Even in a rough overall year, Moran had a 113 wRC+ against right-handers last season.

Moran also has another substantial weakness to note: defense. Moran was the Pirates’ regular third baseman in 2018 and 2019. In those two seasons, here were his defensive metrics at the hot corner (WARNING: viewer discretion advised):

No matter how it’s sliced, Moran was a liability at third base. The Pirates moved him to first base in 2020. He hasn’t turned into a Gold Glover by any means. He’s been quite bad at that position, too. But his defense is at least less of a liability there.

The Moran signing doesn’t have much of an impact on the Reds’ payroll, increasing it to about $100 million. With only four years of service time, Moran is controllable through the 2023 season via arbitration should the team decide to keep him around beyond this year.

Moran’s fit on the Cincinnati roster is a curious one. The Reds still have clear needs on the position player side: right-handed hitters, outfielders, and a backup catcher. Moran doesn’t check any of those boxes. He’s not starting over Joey Votto or Mike Moustakas, both of whom are also left-handed hitters. That essentially relegates Moran to pinch-hitting or designated-hitting when opponents start right-handed pitchers.

Here’s how various projection systems expect Moran to perform in 2022:

These projections certainly don’t inspire a ton of confidence. It’s very possible, however, Moran ends up with more respectable numbers if the Reds use him solely against right-handers and don’t ask him to play much defense.

At the end of the day, this is another in a series of head-scratching moves by the Reds this offseason. Moran could be a useful contributor as a designated hitter and backup to Votto, but his skill set is limited and he doesn’t address any of the team’s glaring weaknesses.

Would the Reds be better off giving the roster spot to a more versatile player like Max Schrock or Alejo Lopez? Perhaps, although that may be less of a question now that Jose Barrero is out for at least six weeks with a wrist injury.

And it’s certainly not as big of a question mark as the current outfield situation. But that’s an unpleasant topic for another day.

It is becoming increasingly clear that the objective function of management is to maximize mediocrity.